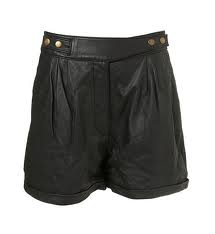 I may as well come clean. I don’t actually own anything made of leather. Not my shoes – all fake. My favourite jacket? Pleather! I could say it’s because I’m making a statement about animal rights since I’m a vegetarian and all but the veggie burger with bacon I downed last week denies me that luxury.

And so it is anyone’s guess how I came to
purchase a pair of leather shorts. Like many a
recent late night conversation, the steps that led to
hitting the “buy now” button on ebay are hazy. As
I recall, I was looking for the perfect match for a gold embroidered corset and nothing screams subtle quite like the combination of boning and leather. Sorry, the whole boning/leather concept is kind of distracting with all that potential double meaning, isn’t it? But I digress.

Said leather shorts arrived at the office in discreet packaging and I took them home for an impromptu fashion parade. As you do. They were short, yes, but I figured I could get away with them providing I applied the number one rule of fashion: it’s okay to show your legs so long as your cleavage is covered. (Let’s try and forget that I was wearing planning to wear a corset, okay? That was a one off). Plus, I was likely to wear them with opaque tights so that was totally cool. Right? Right? Just say yes so we can move on otherwise we’ll be here all day.

I won’t go into full detail about the first night I wore the shorts. Let’s just say there was a German flavour to the evening but no Bratwurst in sight. The shorts turned a few heads but the real trouble started several months later after a brief period of wardrobe hibernation.

I’ve come to realise that one must be in a certain frame of mind to sport the shorts. It’s basically the polar opposite of zen. Think being constantly “on guard” with the misguided confidence of a shirtless straight man on the dance floor of Arq. A thick skin is equally essential as the wearing of the shorts apparently entitles everyone to voice their opinion of your fashion statement.

Let’s get this straight. They are not lederhosen. They are shorts and they are clearly not for the faint hearted. Who knew? Well, you know now. Don’t say I didn’t warn you.

Back to the story. It was a glorious Friday morning and I was terribly exited I didn’t have to work. I had a fabulous new top to wear and it went perfectly with the leather shorts. And so I busted them out and made my merry way along Devonshire Street to meet my colleagues for lunch. Shortly after crossing the intersection with Crown, a truck pulled up beside me and the passenger leered from the window. “Oh yeah!” he groaned at me. I pretended not to hear and carried on to lunch where I was met with endless short related comments. But this was just the beginning. As I crisscrossed the city on foot that afternoon, I would be ogled, harassed and wolf whistled at. If I was a hooker, I imagine it would have been all in a days work. But a hooker I am not and so the experience rattled me somewhat. To calm my nerves, I attempted to drink my body weight in hard liquor. And this is when the shorts became a real problem. Not one to blame my behaviour on alcohol (cough), the shorts seemed the perfect scapegoat. I decided to call it a day around midnight and marched myself home before I made even more of a public display which I’m not sure would be at all possible.

“I’m never wearing the leather shorts again,” I announced to my pyjama-­clad reflection in the mirror that night. Talking to one’s self as clearly a side effect of donning the shorts.

“I blame the leather shorts,” I shouted out to my faithful Facebook friends as the hangover wore off. The shorts were tucked safely back in the wardrobe because, well, they’re leather so obviously you don’t need to wash them. Sometimes they need a little wipe but it wasn’t that kind of night out. And so I was surprised as anyone to find myself handing over the plastic at David Jones the next day in exchange for a crepe burgundy blouse that, you guessed it, went perfectly with the leather shorts.

Although right now, I’m reeling from short fallout, which we shall call short-­out, the shorts will have their time in the sun again. But this time, I will be prepared. No more blaming the shorts. Next time, I’m simply going to own it. Or am I? You’ll just have to wait and see…